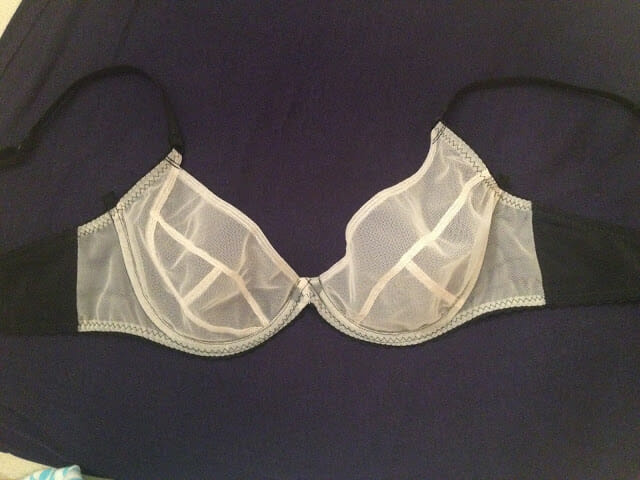 Hi All!
Another week, another bra, and this week more bra theory! More specifically power-bar and push-up theory!

Now I have to say that the bra was a nightmare to photograph, and I feel like the photos don’t really do justice to what it looks like in real life.

But I’ll start off with a little description. This is a short-wired low cut bra. I made this bra using bra-tulle, which is a softer tulle with NO stretch, and I used two layers opposing the directions of stretch to make all the pieces completely no-stretch.

Now – the difference between the cups- on the right side (right side of the photo) I have a cup that is a three-piece, cup with a diagonal seam running through the apex and a split in the lower cup. On the left side I have that same seaming, but instead with a power-bar running from the strap and wrapping under the apex.

Power-bars work to push the breast tissue up and out.

And you can see on the left side with the power-bar- that I had to pinch out a HUGE pinch from the cup, because so much of my breast tissue was pushed out of the bra! and up!

Now how to photograph that. lol

It might be hard to tell but there is significantly more tissue and mounding up on my chest wall on the breast on the left (the further one away) than the one closer.  The breast on the right is more contained in the cup and less mounded higher on the chest wall.

You can see from this photo of the power-bar breast, that there is  a lot of tissue that is pushed UP and out of the cup! And that the power-bar is really pushing me in and up!

And in this angled shot you can see just how much more tissue there is mounding out of the top of the cup on the power-bar side rather than this side without a power-bar!

Now I’m not sure whether this make the breast appear larger, or smaller. I think looking at if you’re looking at the comparison in the bra- the side without the power-bar looks bigger because there is more breast tissue in the cup. However, in person and under a t-shirt or tank top, the other side actually looks bigger because you can see more clearly all the tissue that is pushed higher on the chest wall.

Also consider in this photo that I have the same tan lines on both sides, but the power bar has pushed that inch of un-tanned breast up higher and out the bra on the left side! crazy!

So what do you think? Have you ever used power-bars for lift? do you notice the difference? Let me know what you think!

Now on to your beautiful makes!

First we have this cozy bra from Karin of Mrs.Weaver’s Finest!

This is Karin’s ‘Wild Rose’ bra, and wow isn’t this just the epitome of comfort chic? It’s definitely one of those bras that just calls out to be worn! Made with all of my favourite things too! The cut& sew, the fold over elastic, and lovely soft cover fabrics!

Karin also made these beautiful ivory lace panties to go with it, along with a matching cami! You’re lucky that I wouldn’t fit into this Karin- that’s all I can say!

Although someone might be lucky enough to have one of these beautiful bras for themselves!! Karin is very generously donating one of her bras to a silent auction for Breast Cancer Support!! What an inspiration for all bra-makers 🙂

Don’t forget to check out Karin’s post about her beautiful creation over on her blog!

Next we have a strappy black number from David of Bonnet Bleu !

David made this bra using strap elastics and foam cups!

The straps that connect between the bridge at the front of the bra, continue to the back band and are placed in the normal strap placement at the back of the bra, where the straps front the top of the cups wrap around the neck line a halter.

Very interesting style lines! And this doesn’t affect the style lines of the straps in the back! Very chic in black!
———————————————
And last but not least we have this pretty bra from Christie!

Christie made this bra for her sister using foam cups covered in a very thin stretch pink fabric, she used an embroidered tulle lace for the front frame and pink powernet for the back band! And look at that cute detail on the straps!

Christie based her inspiration off of this RTW bra- super cute. Unfortunately the fit wasn’t perfect for her sister- but definitely worth trying again!
————————————————————–
Thank you so much for your lovely contributions this week!
How is everyone feeling about the challenge so far this fall? Are there any specific topics that you can think of for more bra-theory? – I’ve already had a suggestion for theory on changing cup seaming and modifying patterns (thanks Sofia!) any other suggestions?
Don’t forget to check out the Pinterest board, and the Flickr Group if you enjoy those platforms! To grab a challenge button and to send your bra for next week to bra.a.week@gmail.com by Friday for the next Sunday post!!
Hope you’ve all had a lovely weekend!
xo erin