This year, I will admit that I let my make-up loving side get the better of me and went as a sugar skull- which has no special costume elements in particular and I just wore a black dress…. BUT THE MAKE-UP WAS SO COOL! – I did lose a part of my sewing soul though…. 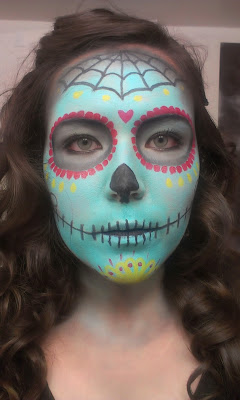 BUT I did have a chance to make a costume earlier this month (making up for my lack of epic costume on Halloween), and as the title of this post suggests- ♫ it was the one named Sailor Moon ♫! I was huge a fan of Sailor Moon when I was a kid, and I remember watching them thinking “they’re so pretty and brave!” and that tuxedo mask probably still had cooties… anyways
It all started when my sister said- “Hey there’s a super hero themed pub night at my college, want to make us some costumes for it?”, and I said “DO I?! – YES!!, when is it?”, and she said “tomorrow night”….. So after a frantic trip to Fabricland, and to H&M to get two white v-neck t-shirts, I started on my marathon of sewing to finish our Sailor costumes: Sailor Moon (for my blonde sister) and Sailor Jupiter (for brunette me!).
After quite a few hours, and an unknown amount of “will I get this done on time?” moments, that were calmed with chocolate, I finally finished the costumes!! And they were amazing! 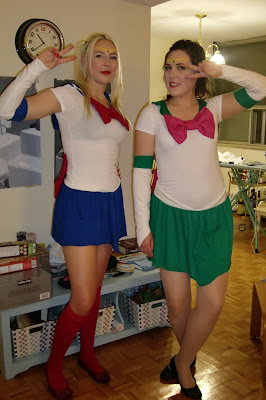 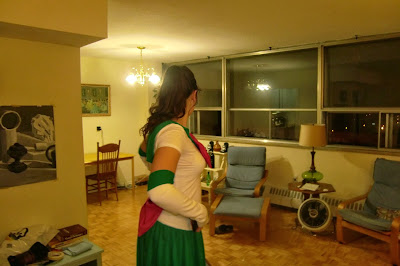 After doing the first one, the second one was a lot easier to whip up. And seeing as everything in the costume has ample amounts of lycra, eyeballing all the measurements worked out fine. Some of my favourite costume elements are the gloves, and the bows, who doesn’t want a huge bow on their butt?, and as I am Emerald Erin, I was quite pleased with the overall colour scheme that Sailor Jupiter has going on. 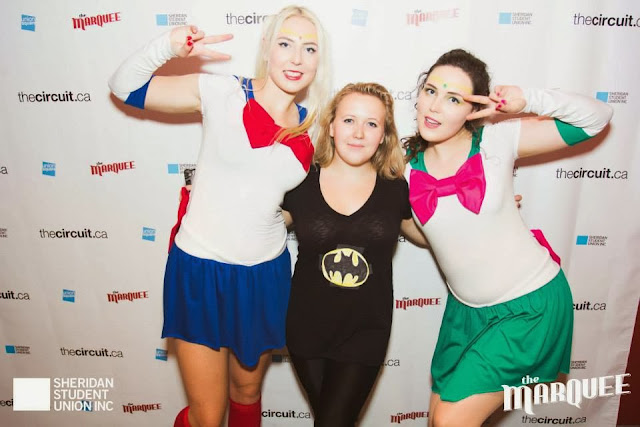 This is a photo taken at the actual event and, as you can see, my sister is the gloriously tan and blonde one, and I am the almost fluorescently pale brunette, and in the middle is our friend who went with a batwoman theme. – I can say that we were perhaps more dressed up than most, but our costumes were generally loved, and I do feel like this makes up, at least in part, for my lack of sewn costume this Halloween.
As a last little tidbit to this Halloween post, I will share the Halloween costumes of my favourite stuffed animals growing up, my first models for sewing as a kid, I’m not sure how old I was when I made them these costumes, probably 10-12 – a witch, a pumpkin and a fairy! And I still dress them up for Halloween every year! 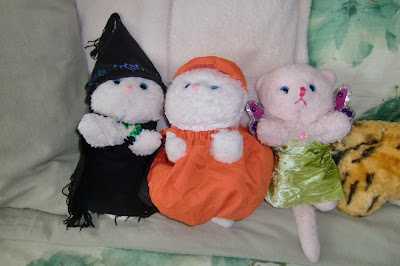