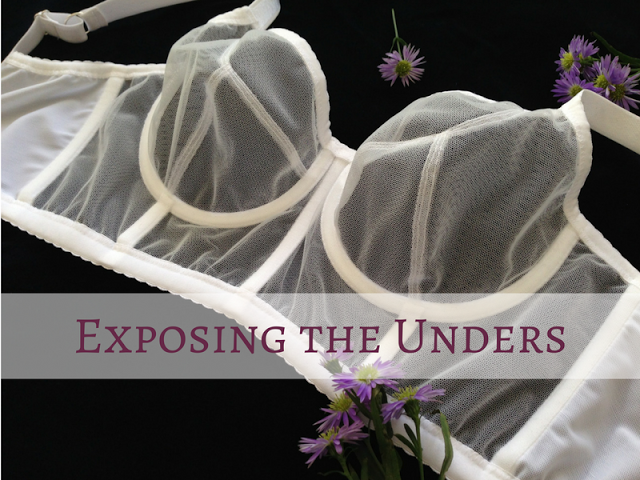 The other day I posted this photo on my Instagram for Day 3 ‘Close-Up’ of the Bimble & Pimble November sewing photo challenge #bpsewvember, and it got a lot of loves 🙂 So I thought I would go through my Exposing the Unders worksheet and show the nitty gritty details!

This bra is the ‘Snow White‘ bra that I made for the bra-a-week challenge, just over a year ago, I can’t believe it’s been so long!

So let’s dig into this!

This bra is a full band bra, with the channelling turning away from the cups to the frame.

The bra has 3 pieces in the cup. Now it is a little more complex when it comes to the main seam (which is why I didn’t select one) because this seaming is almost a little bit of a hybrid. I would argue that this is closest to a vertical seam, but I think it could also be argued as a bit of a diagonal as well. Which is why it’s great to draw your seams in the next section!

As far as details this bra is actually quite simple. No special cup details or strap details.

The details are mostly in the frame, which is a longline frame with boning at the centre front, side seams and directly under the cups.

The materials are also quite simple- my favourite bra tulle (which I always use a double layer with opposing direction of stretch), and powernet for the back band.

I have to say that this bra hasn’t seen as much wear as it should- I’ve been keeping it nice for display and example in my studio, so it hasn’t made the rounds through my drawer yet- I might just have to make myself another!

Let me know if there are any other bras that you are interested in having me ‘Expose the Unders’ they can be ones that I’ve made in the past or ones that you are swooning over on Pinterest!

Have you used the Exposing the Unders worksheet yet? How did you like it?

Love to hear from you!